3 Ways to Reduce the Risk of Failure of Onboarding Leaders 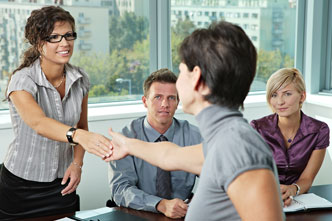 You have just hired a senior leader for a newly created role at your company.  How do you ensure she is successful so that you quickly see a return on your investment?

The successful assimilation of new managers or leaders has a huge impact to a company’s bottom line. A white paper from Drake Beam Morin (DBM) and Human Capital Institute (HCI) on this topic cited a study listed in “Topgrading” by Bradford Smart.  It “asserts that for those earning between $100K and $250K, the cost of turnover is 40 times base salary. This… includes both direct costs as well as indirect costs, such as missed opportunities and lost productivity.”1  Unfortunately, there is often the perception that a new leader is a “plug and play” new hire; you can hire an experienced executive, plug them into the organization and they are off to the races, creating value and contributing to the bottom line.  In fact, the studiessay otherwise:

Here are 3 ways an employer can change the odds in their favour:

GE, a company known for its development of top-notch leaders, has a process whereby new managers, whether new to a team or new to the company, are provided a New Manager Assimilation session that is typically facilitated by HR or a third party.  The New Manager Assimilation (NMA) is normally scheduled during the first 3 months of the new manager’s tenure and is designed to ensure a two-way flow of communication between a manager and his/her new team early on in the relationship.  The process often helps to defuse problem areas or misunderstandings that can quickly become mountains when it would have been easier to tackle the molehill.

The stakes for an employer hiring a new manager or leader are high and the timeframe in which to get it right is very short.  Adopting an onboarding process for new leaders that includes mentoring, 30/60/90 day goals and a New Manager Assimilation will lessen the risk of the new leader being added to the statistics of failed leaders.